Update: As it turns out, this solution causes people to get used to the ringing phone, causing not only the reminder to be ignored, but actual incoming calls as well. We have thus stopped using this solution.

It is considered best practice to regularly and often ventilate closed rooms due to SARS-CoV-2. But how can we make sure we remember to open the windows every now and then? We wanted to build some kind of visual or acoustic mechanism that would tell us when to open the windows.

I came up with the idea to abuse our already existing telephone system as a reminder system. This system consists of a central Asterisk server, and multiple SIP phones. The idea was to have Asterisk dial all the SIP phones, and set the reminder text as caller ID. The "secret" behind this is Asterisk's console calling feature. And here is how it's done:

In a default installation of Asterisk on Debian, this should be all that's required for console calling to work. In our case, Asterisk is running in a VM and the default audio device is a virtual sound card not used otherwise, so there was no need for additional configuration.

Next, we can configure the dialplan in /etc/asterisk/extensions.conf for our reminders:

To apply this change, we have to reload the dialplan:

We can then test our reminder by telling Asterisk to originate a call from its console context:

Now your phones should start ringing, and display your reminder text as the caller ID.

Finally, in order to schedule the reminders, just put them into the crontab of the Asterisk server. In our case, I configured it to ring every full hour on Tuesdays between 8 and 11 PM:

Last week we discovered a box full of old Cisco 7900 series IP phones hidden deep in a pile of boxes in our hackerspace. Of course we tried to get them up and running and figure out how to configure them.

What we learned was that the images had to be served alongside the configuration via TFTP in a proprietary format. The tool to convert images into this format comes bundled with every firmware release for the phone. However, we quickly encountered some limitations:

To get around the limitations of the converter tool, I attempted to figure out the file format and write a free and cross-platform converter without these limitations.

So let's have a look at a hexdump of one of those image files converted with bmp2logo.exe:

We know that the image consists of 88 x 27 = 2376 pixels. And since the input to bmp2logo.exe has to be a 1-bit-per-pixel uncompressed image, let's just assume that the same holds true for the output. This would give us a payload size of 297 bytes, so with a file size of 304 bytes, there should be a 11 byte header.

The next three bytes were all zeros, followed by a byte representing the serial number. Or so i thought at first, until I passed a serial number of -1 to bmp2logo.exe, and got ff ff ff ff as these four bytes, so this pretty clearly is a 32-bit representation of this number. The next two bytes were pretty obvious as well, they are the height and width of the image, 27 and 88 respectively.

The last byte of the header seems to represent the number of bytes that comprise a single row. I'm not entirely sure about this, but it made the most sense, especially if we assume that there are other phones out there which may support grayscale images, and need a greater color depth and consequently more bits per row.

Now, on to the last part: The checksum. I was a bit lost here, so I just tried various ways of compressing data into 16 bits: Adding them, xor'ing them, swapping bytes around before adding them, always wrapping the results to 16 bits. In the end it was a typo that brought me to the solution: Instead of sum = (sum + swapped) & 0xffff, I wrote sum = (sum + swapped) % 0xffff. So instead of performing addition mod 65536, i was performing addition mod 65535 by accident. The result of this turned out to be just the binary inverse of the intended checksum, so let's add a final sum ^= 0xffff before returning the result and call it a day.

With all that information, and verifying that the payload did indeed match the uncompressed monochrome image, we finally got our file format:

To summarize, the file consists of an 11 byte header, followed by the payload. The header consists of:

Following the header is the image payload, with each pixel expressed as a single bit, in row-major order starting in the top left corner.

A Python implementation of the checksum algorithm could like this:

Now that we know how such an image file is composed, we can write a tool to generate these files. And here's the result: 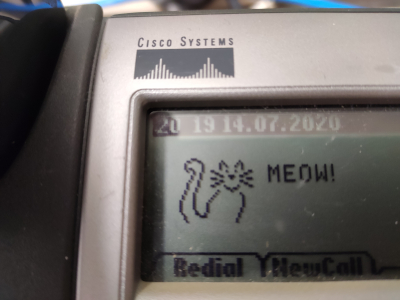 You can find the converter script on Gitlab. It can be used in exactly the same way as the original bmp2logo.exe converter:

Remember to increment the serial number every time you change the image, or the phone won't pick up the new file.

I recently encountered the following challenge: I had a PDF document consisting of multiple A4 pages, each of which I needed to print scaled up to A2. However, I only had an A4 printer available, and the printer driver was not able to perform the scaling and/or slicing on its own.

After a long search, and lots of disappointments (since neither of Libre Office, Inkscape and Evince could do what I wanted, or I simply couldn't find the feature), I came up with the following solution:

The first command takes the input file, scales it up to A2 size, and writes it to an intermediate file. The second command slices each page from the intermediate file into 2 slices both vertically and horizontally, totaling in 4 slices per page, which again results in A4-sized slices the printer can print.

I previously deployed some ad-hoc services using ugly and difficult to maintain solutions, such as binaries manually extracted from container images and copied into /usr/local/bin. Of course, this is a lot of manual work for each upgrade of the service, and if you upgrade often, a lot of repetitive manual work. Or, in other words, the perfect kind of work to be automated.

So I decided to package the software in question for Debian, which is the Linux distribution I run these services on, and to automate the process of building the packages and publishing them to a repository. There's three different "categories" of software I wanted to have in my repository:

For creating and maintaining the repository, I'm using Reprepro, as it is extremely simple to use, and generally is rather uncomplex and lightweight. It does however come with some limitations; I especially encountered the problem that Reprepro will only keep the latest version of a package in the repo index, so older versions won't be available to clients.

For automating the packaging and repository build process, I'm using Gitlab CI. The pipeline is running each night, building the latest stable version for each package, adding the packages to the in-container Reprepro repository, and then synchronize the repository to a web server of mine.

The source repository with the package build scripts and pipeline configuration is available on Gitlab. Though, before using this as a template, be advised that the packages built by this pipeline are not exceptionally high-quality. They are also usually built to fit my personal needs, so don't expect ready-to-use packages.

I don't usually watch TV. But from time to time there is something interesting on the programme, such as debates on local politics. Unfortunately, those usually run at a time of day where I'm not able (or more likely not willing) to tune in an pay attention to an hour of political discourse. So I want to record them and watch later instead.

My ISP provides its IPTV programme as MPEG-TS streams via multicast UDP. And they even link a M3U playlist of all stations on their website, so you can basically watch TV with any client whatsover, as long as it speaks IGMP and understands MPEG-TS video streams. This makes recording very easy, as this is supported by a lot of multimedia processing software, including ffmpeg.

The playlist consists of a list of TV stations, each of which is represented by its own multicast group and an UDP port. So let's just take the first station and see what ffmpeg finds in there:

We can see that the MPEG-TS stream contains multiple indiviual streams, which are listed in the output above. Now, I don't know what's up with 0:5 and 0:6, or why ffmpeg doesn't understand them. Anyway, I only need the video and one audio channel. Let's just pick the first two, and record an one hour TV show:

To break it down:

So the whole ffmpeg command takes the original stream as input, demultiplexes it to get the individual media streams, then throws out all but one video and one audio stream, multiplexes them into a Matroska container, which is then written to disk.